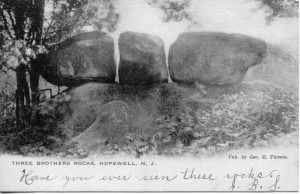 There occurs in East Amwell two very distinctive rock formations that are the subjects of tales of ghosts and specters.

The Three Brothers rock formation is on the west side of Reillyville Road almost across the street from the Sourland Preserve.  It is a formation of 4 boulders: one gigantic one, on which rest three massive oblong ones. Each boulder weighs many tons.  The area was originally known as Pero’s Hill after Pero the Hermit, a person who lived in a cave in the area during the 1700s. Over the years a story began to be told that three men came upon the Devil himself on the mountain and trying to overcome him, the Devil turned all three into stone. The Devil is featured in many tales on the mountain including at Devil’s Half Acre, the Devil’s Doorway near Highfields, and a gigantic bird seen around the mountain known as the Devil Bird. And we can’t forget the Devil Dog, said to walk along behind you as you walk the Sourland’s roads at night. During the Victorian area the Sourlands became a popular spot for outings and picnics and many photographs and postcards exist of fashionable women sitting on the Three Brothers enjoying their day in the woods.

On Zion Road, heading east towards Spring Hill is another well- known formation known as Knitting Betty’s Rock. Legend has it that during the American Revolution, as troops gathered at John Hart’s farm in Hopewell, Betty’s sweetheart joined the patriot army and marched off to Monmouth where a very ferocious battle ensured. Betty waited on this rock, attending to her knitting, hoping to see her boyfriend coming up the road. When news reached her that he had died on the battlefield, she refused to believe it, but stayed at her post to the end of her days. After her death the spot became known as Knitting Betty’s Rock. Many claimed to have seen her elusive and evanescent appearance, dressed in a white lace gown much like flowing spider webs. Whenever anyone comes close to her spirit, she disappears, but still lives on in the tales of the Sourlands.