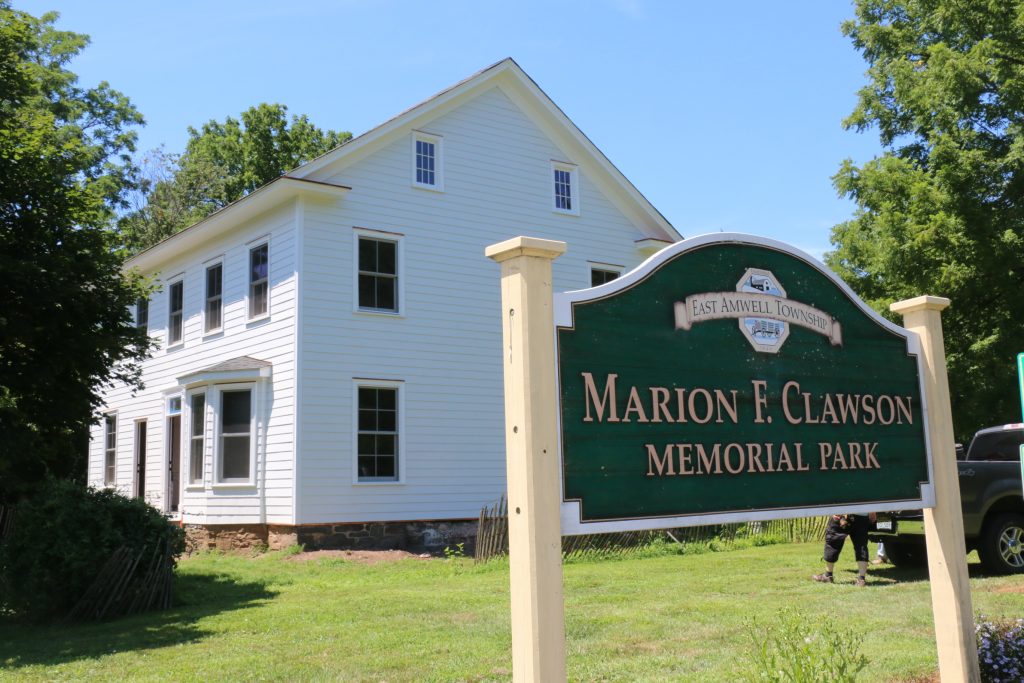 Hunterdon County is getting a brand new museum!

The new home of the East Amwell Historical Society, the museum in the former Clawson House features several furnished rooms – including a Victorian-era bedroom, living room and 1920s-era kitchen complete with a Hoosier cabinet and icebox and antique kitchen items. There are children’s toys and books from the 1800s and other antique furnishings. Most of the furnishings in the house have been donated by local residents.

The museum, located at 1053 Old York Road in East Amwell, has been restored and decorated to reflect the building during the period 1880-1920. It fronts Marion F. Clawson Memorial Park.

Its first special exhibition will showcase the art of Fred Gardner. The East Amwell resident works with oils, watercolor and pastels, and his art can be found in collections throughout the tri-state area. Gardner also has donated paintings to several non-profits organizations, including D&R Greenways, New Jersey Conservation and Princeton Academy.

The show will include Gardner’s hand-painted Christmas cards along with a selection of his paintings. To celebrate the opening, Gardner has painted a portrait of the Clawson House which will hang permanently in the front hallway of the building. Gardner’s work will be on display until Nov. 4.

The transformation of the building during the past five years has been remarkable, noted East Amwell Historical Society President Jim Davidson.

“I wasn’t sure if we’d get this place done,” Davidson said. “Back when we started, the windows were all boarded up so you’d need a flashlight to make your way around inside the house during the daytime. And with the flashlight on it was kind of scary: The wallpaper was hanging off the walls and cobwebs were everywhere. When we were working on the house we’d find dead animals up in the ceilings.”

Careful planning went into the creation of the museum. Davidson noted how historical society members toured museums through the state to determine what worked and what didn’t before planning the Clawson House.

“We realized we needed a flexible floor plan, being able to display local memorabilia that you’ve collected but not to the point that you stifle yourself,” Davidson said. “We wanted to make sure we have rotating exhibits that will appeal to a variety of interests.”

Much of the funding for the East Amwell Museum came via historic preservation grants from Hunterdon County’s and East Amwell’s Open Space Trust Funds. Significant monetary donations by Northfield Bank, the JCP&L Foundation and local individuals also helped get the project finished.

“The historical society is truly grateful to everyone who played a role in making this happen – from the state, county and municipal officials who supported this project, to all the volunteers and everyone who donated,” Davidson said. “This is truly a community effort, and we know everyone is going to be wowed by the results.”

Earliest records of the Clawson farm mention a house on the property in 1810, when David Bishop, a veteran of the American Revolution owned the property and probably built the house. Architects and restorationists speculate that the house may older, perhaps dating to the 1780s.

The house is a typical center-hall colonial with a large room with a fireplace to the left and two rooms to the right. In the late 1800s, these two rooms were “Victorianized” by the addition of a front bay window, pocket doors and heavy Victorian moldings. Upstairs the house has five rooms, the smallest of these once served as a nursery. Much of the original woodwork, doors, wide board flooring and hardware remain. The main staircase, all original, is particularly attractive. In the early 1900s the house was converted to a two-family dwelling, with the back expanded to include two kitchens, bedrooms and baths. Due to its poor condition, this addition was removed prior to renovation of the house, and a new addition was built.

The house has been restored and decorated to reflect the building during the period 1880-1920.