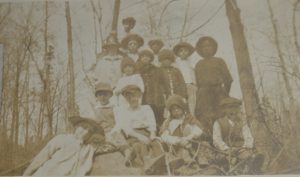 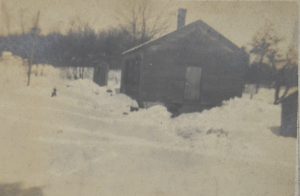 I had the occasion of spending a few hours at East Amwell School going through the teacher registers of the Mountain Grove School on Lindbergh Road. This was the oldest continually operating school in the Township holding classes from approximately 1814 to about 1917 in the same building.  East Amwell School has registers from all the one room school houses from about 1894 onward. I looked at the registers of Mountain Grove from 1894 to 1917 when I believed the school was closed and the students sent to Wertsville School.

They were quite an interesting read. In 1895 the school year was 210 days (compared to 180 today). The teacher was Hattie Hughes who made $438 for the year. The total number of students enrolled in her class was 39 but the average attendance was only 10. Students ranged from 5 to 19 in the same one room building. Most teachers only lasted a year or two and then moved on. The early registers show that many students left at age 13 -15 to work. Until the turn of the century the school had no library. In 1902 there was a drive to raise money for library books – they raised $10 – and by 1917 the library had grown to 100 books. In the early years there was no long Christmas vacation, only Christmas and New Years Day off as regular holidays along with Election Day and Thanksgiving. In 1900 Lincoln’s and Washington’s Birthday were added. By 1903 they had added 3 teacher training days in Flemington known as Institute Days. It was also interesting looking at the addresses of the students – Zion, Wertsville, Stoutsburg, Montgomery and Hopewell

Other interesting tidbits…In 1901 the school lost 5 days due to snow storms, one day because the stove broke, and two weeks because the teacher was sick. Another year the school was closed when the teacher missed the train (most boarded for the term locally) and in 1917 the students had a week off when their teacher, Augustine Fluck got married and became Augustine Craft (see her  picture standing on the school steps in our new book on East Amwell). The year with the least school days was 1916-17 when the school was only opened 174 days because the building had been quarantined due to an outbreak of infantile paralysis (polio).